The presentation of the Numismatic Program 2020

The presentation of the Numismatic Program 2020 took place in the context of an event at the Bank of Greece, on Tuesday, February 11, 2020, in the presence of the Governor of the Bank of Greece Mr. Giannis Stournaras, the Minister of Finance Mr. Christos Staikouras and the President of the Honorary Committee Mrs Marianna V. Vardinoyannis.

A special feature of the Monetary Program 2020 is the issuance and circulation of currencies that commemorate the anniversary of the completion of 2,500 years since the Battle of Thermopylae and the Battle of Salamis.

The Monetary Program is implemented every year by the Ministry of Finance and the Bank of Greece and includes collector’s and commemorative coins inspired by important anniversaries of the year of publication, by the country’s cultural heritage, important personalities, and the natural world. The design and printing of the coins is done by the Banking ​​Printing Foundation (IETA) of the Bank of Greece.

Information on the Numismatic Program is published on the websites of the Ministry of Finance and the Bank of Greece. 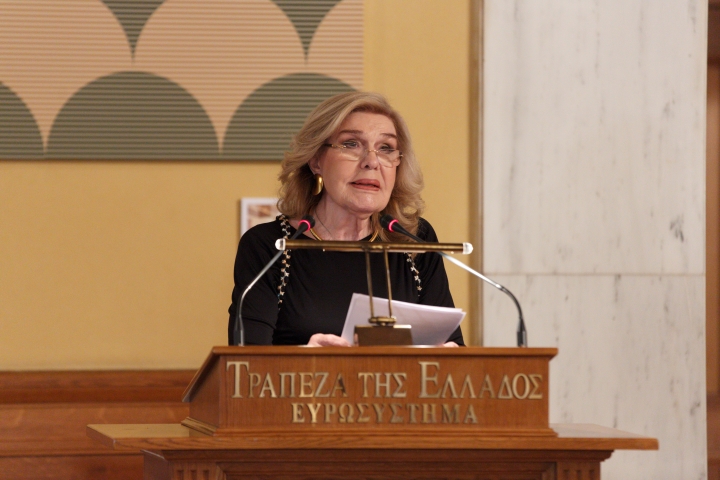 Dear Mr Governor of the Bank of Greece,

It is a great honour and pleasure to be here today with you. To be here with the originators and supports of such an important project, our country’s Numismatic Programme 2020, which this year honours the great 2500-year anniversary from the Battles of Thermopylae and Salamis.

This Anniversary becomes the vehicle for the promotion of the history of Greece and its fundamental role in the birth and shaping of the Western Civilisation. At the same time it provides the opportunity to our generation to contemplate on its countless symbolisms and global values, such as those of democracy, freedom, virtue and bravery, which emerge through the most glorious defeat, in Thermopylae, and the most critical victory, in Salamis, and for the younger generation to partake in this great legacy and pass it on to the societies of the future.

Our Foundation, with a particular sense of responsibility, is organising events of an educational, scientific, cultural and humanitarian nature, in the context of Anniversary Year “Thermopylae-Salamis 2020”. We are collaborating with the Greek State, with the Church and with prominent personalities from Greece and abroad, as well as the Greek Diaspora, many of which are members of the Honorary Committee of the Anniversary Year, to disseminate our messages far and wide to every corner of the globe, and as deeply as possible in the local communities of our country.

In this effort, the Ministry of Finance and the Minister, Mr Christos Staikouras, and the Bank of Greece and its Governor, Mr Giannis Stournaras, become our invaluable allies with the “Numismatic Programme 2020” and the circulation of commemorative coins for the Anniversary Year. Coins which over the coming months will reach the hands of Greek and foreign citizens in honour of these two epic moments from the history of mankind. I would like to sincerely thank them for this outstanding national initiative and their more general work that encompasses the economy, the country’s growth and our culture.

I would also like to thank the Deputy Director of the Banknote Printing Works Department of the Bank of Greece, Mr Markos Kontaxopoulos, for his contribution in this effort, and everyone else who worked towards this goal.

I am deeply moved by the thought that the numismatic art which flourished in Ancient Greece, which helped pass on from one generation to the next the history of significant figures, symbolism, events, becoming an inexhaustible field of study, continues today to be a means for disseminating ancient Greek values, encapsulating 2,500 years of cultural heritage. Greece, with its priceless wealth of ancient coins, which were more than a means for transacting, micro-sculpture masterpieces, is upholding this millennia-long tradition, creating a unique legacy for the generations to come, and a sense of historical continuity.

I would like to congratulate the artists of the Bank of Greece, and the entire staff behind the creation of these beautiful works, for their outstanding work.
The power of Thermopylae, the virtue of the Spartans and the Thespians, the strategy of the Athenians, the solidarity of the Greek cities which took part in Salamis, the victory of democracy and freedom, will radiate for the duration of the Anniversary Year through our actions and initiatives, like the one today, offering inspiration and optimism about building a better world.