OFFICIAL CELEBRATION OF THE 2,500TH ANNIVERSARY

In an emblematic, modest and highly symbolic event, attended by Her Excellency the President of the Hellenic Republic, Katerina Sakellaropoulou and Prime Minister Kyriakos Mitsotakis, the Greek people honoured the 2,500th anniversary of the Battles of Thermopylae and Salamis.
The event was held on the initiative of the President of the Honorary Committee of the “Thermopylae-Salamis 2020” Anniversary Year, Marianna V. Vardinoyannis, in collaboration with the Hellenic National Defence General Staff (HNDGS), on Wednesday, 30 October 2020, at the Hellenic Naval Academy in Piraeus, and was broadcast live on ERT2 and via livestreaming on the Google platform.
The opening of the event, with the 21-gun salute marking the arrival of H.E. the President of the Republic, the honour guard lined up in front of the iconic building of the Headquarters of the Naval Academy, and the melodies of the Navy Band, conducted by Lieutenant Commander Georgios Tsilimparis, created a majestic atmosphere.
At the same time, the Trireme ‘Olympias’, the Frigate ‘Navarino’ and the Missile Boat ‘Ritsos’ were illuminated in the offshore area in front of the Naval Academy, symbolizing the historical continuity of the Hellenic Navy.
H.E. the President of the Republic and the Prime Minister were welcomed by the Chief of the Hellenic Navy General Staff, Vice Admiral Stylianos Petrakis, and the Commander of the Academy, Rear Admiral Ioannis Kalogeropoulos.
In compliance with health protocols, very few guests were in attendance for the event.
The Cypriot people were represented by the wife of the President of the Republic of Cyprus, Antri Anastasiades who travelled from Cyprus to attend the event.
Also present at the event was the husband of the President of the Republic, Pavlos Kotsonis, and the Prime Minister was accompanied by his wife, Mareva Grabowski-Mitsotaki.
Culture Minister Lina Mendoni, Interior Minister Takis Theodorikakos and Deputy Defence Minister Alkiviadis Stefanis also attended, and welcome addresses were given by the Chief of the Hellenic Navy General Staff, Vice Admiral Stylianos Petrakis, and the Chief of the Hellenic Army General Staff, Lieutenant General Charalampos Lalousis.
The keynote speaker was Konstantinos Bourazelis, Professor Emeritus of History and Archaeology at the University of Athens, and actress Maria Nafpliotou moderated the event.
A very moving recitation by Maria Nafpliotou of the ‘Battle hymn of the Greek Warriors of Salamis’ riveted the guests and set the tone for the opening of the event.
The guests were welcomed by the Chief of the Hellenic Navy General Staff, Vice Admiral Stylianos Petrakis, who stressed in his speech the great importance of this celebration, especially at this time: “The celebration of these two events in global history could not come at a more pertinent time. The challenges from the East are once again at our doorstep. The doorstep of Greece and Europe. We have been taught by the best how to deal with historic challenges. And inspired by their struggles and the model that is their legacy to us, we are conscientiously doing our duty, faithful to our oath and mission.”
This was followed by the introductory speech by the President of the Honorary Committee, Marianna V. Vardinoyannis, who spoke of the importance of the values of Virtue, Democracy and Liberty:
“We vindicate the memories of our heroes when we live according to their values, when we are inspired to make a better world, when we defend democracy and liberty, when we feel that we are not separated by 25 centuries from these battles, but unified by shared choices. In an era when humanity is bent under the burden of an unprecedented crisis and insecurity, we want today’s event to be not just a bow of honour to the past, but also a springboard for the struggle for a common, hopeful future.”

The President of the Honorary Committee announced that one legacy of this Anniversary will be the “Declaration for Democracy and a Global Culture of Values” that, on the initiative of Mrs. Vardinoyannis, will be promoted in the international community and be signed by prominent figures.

Mrs. Vardinoyannis closed her speech with an excerpt from the Declaration: “… as brothers and sisters, from the sacred soil of Attica and Greece, let us make a joint commitment that the Liberty, Culture, Values and Ideals established through struggle, and springing from the blood of Heroes throughout time on this earth shall forever constitute the core of our Existence and our Legacy for the generations to come.”

H.E. the President of the Republic, Katerina Sakellaropoulou, spoke of the importance of historical memory and of “returning to our roots” in observation of the anniversary: “Today, our country and Europe are facing new challenges and various tests: in the economy, public health, geopolitics. Many people point to a crisis of democracy and of our civilization itself. Immersion in history and its teachings, in events that resonate through the ages, is for us an inexhaustible source of knowledge and fortitude. It clears our thoughts of biases and reconnects us to the essence, the foundations of our co-existence. It safeguards us from historical anachronisms and oversimplifications that shrink the boundaries of our understanding and undermine the dialogue between cultures. In our celebrations and events, we once again pick up the thread of democracy and the guiding spirit that links ancient and modern Greece and Europe. Marking this anniversary with a return to Thermopylae and Salamis is the very least we can do to honour our national pride and the universal value of our cultural heritage.”
The First Lady of Cyprus, Antri Anastasiades, spoke movingly of the Cyprus problem:
“We must learn from the messages of the Battles of Thermopylae and Salamis so that, through close cooperation and solidarity between states, we can secure stability in the wider region. We Cypriot Greeks, especially – as our homeland has been under Turkish occupation for over 46 years – cling to these universal human values as we pursue a just outcome in our struggle to reunite Cyprus and safeguard the human rights of its citizens. I take this opportunity to express the gratitude of the Cypriot people for the support of the Greek people and every Greek government – decisive support that is of highest importance – for the efforts we are making to find a just and viable solution to the Cyprus problem.”
The international community also participated in the celebration, with Audray Azoulay, the Director-General of UNESCO and member of the Honorary Committee, sending a videotaped address, in which she said, among other things: “Today, the threats humanity is facing are different. In the face of these threats we must make choices like these Greek cities 2,500 years ago we must overcome our differences, by defining which values we want to guide us.”
Culture Minister Lina Mendoni talked about how the Battles shaped Western Civilization: “For 2,500 years now, Hellenism and the western world have acknowledged the victory in the Persian Wars as an event that contributed decisively to saving and consolidating their then nascent civilization, with a catalytic effect on the philosophical, political and artistic outpouring that followed, under the physical and intellectual leadership of the Athenian democracy. The foundations of modern Greek, European and western culture, as we know it today, and the identifiable common intellectual and ideological origin and identity of the peoples who embraced and further cultivated this culture, rest to a great extent on the symbolic and substantial foundations laid exactly 2,500 years ago through the proud Greek victories over the Persians and the catalytic effect these victories had, retaining their power, undiminished, in myth and history.”
Interior Minister Takis Theodorikakos spoke of the special conditions under which the anniversary celebrations are taking place and the importance of unity among Greeks under all conditions: “This year’s celebration of the 2,500th anniversary of the Battles of Thermopylae and Salamis unfortunately coincides with a global threat to human life: the coronavirus pandemic. And this certainly impacted the scale and splendour of the events that were planned. The Ministry of Interior, in collaboration with other Ministries, local administrations and the Vardinoyannis Foundation, participated in the national committee for the celebration. The result was good, bringing once again to the surface the great memories and historical conclusions associated with the Battle of Salamis. The first and most important conclusion is that the Greeks can successfully face the great threats and challenges of every era, but only when they are united. The second is that the victory and success of the Greeks, like any organized effort, requires strategy.”

The Minister of National Defence, Nikos Panagiotopoulos, was represented by the Deputy Minister of National Defence, Alkiviadis Stefanis: “These two events of 480 BC are a legacy of the history of the Greek nation. As a constant guide and compass on the course of our national awakening and rebirth, they hold a prominent place in our collective memory and are a timeless reminder of indomitable will, pride, boundless resilience and greatness of the Greeks,” Mr. Stefanis said.

The Chief of the Hellenic Army General Staff, Lieutenant General Charalampos Lalousis, delivered an address on behalf of the Chief of the Hellenic National Defence General Staff, General Konstantinos Floros: “The Battles of Thermopylae and Salamis are truly milestones in world history, and this is why they are discussed in virtually every book on antiquity. One could say that European history begins with these two battles. The first marked the decision to resist obscurantism and barbarity, and the second marked the first victory of liberty over subjugation. Both of them created the conditions for Europe’s slow but steady evolution into what it is today: The continent of humanism, of liberty, of democracy and of human rights.

The keynote speaker at the event was Konstantinos Bourazelis, Professor Emeritus of History and Archaeology at the University of Athens, whose speech was titled, “The wooden walls and human walls that withstood and withstand. Thoughts on the Battle of Salamis and the Battle of Thermopylae.”
“Especially for Athens, wooden and human walls had withstood onslaught and ensured survival and victory, laying the foundations for the city to flourish even more and to develop its unique political system, democracy. On the waters of Salamis floated the great Greek city’s prospects for further glory, as manifested in its subsequent naval hegemony in the Aegean and beyond, and its accompanying cultural leadership.
For later generations, Salamis would always be strongly associated with the ordinary seamen, the naval body on whose arms and breast the Athenian political tradition was built, forever leaving the mark of its values on global civilization. We all hark back to the ideological seed of the Warriors of Salamis. Let us remember it to draw strength from it whenever countless numbers attempt to shake our confidence in and commitment to the ideas of liberty and democracy. And in that sense, noblesse oblige,” Mr. Bourazelis noted, among other things.

We thank ERT2 for its live coverage of the event and Google for supporting livestreaming of the event. 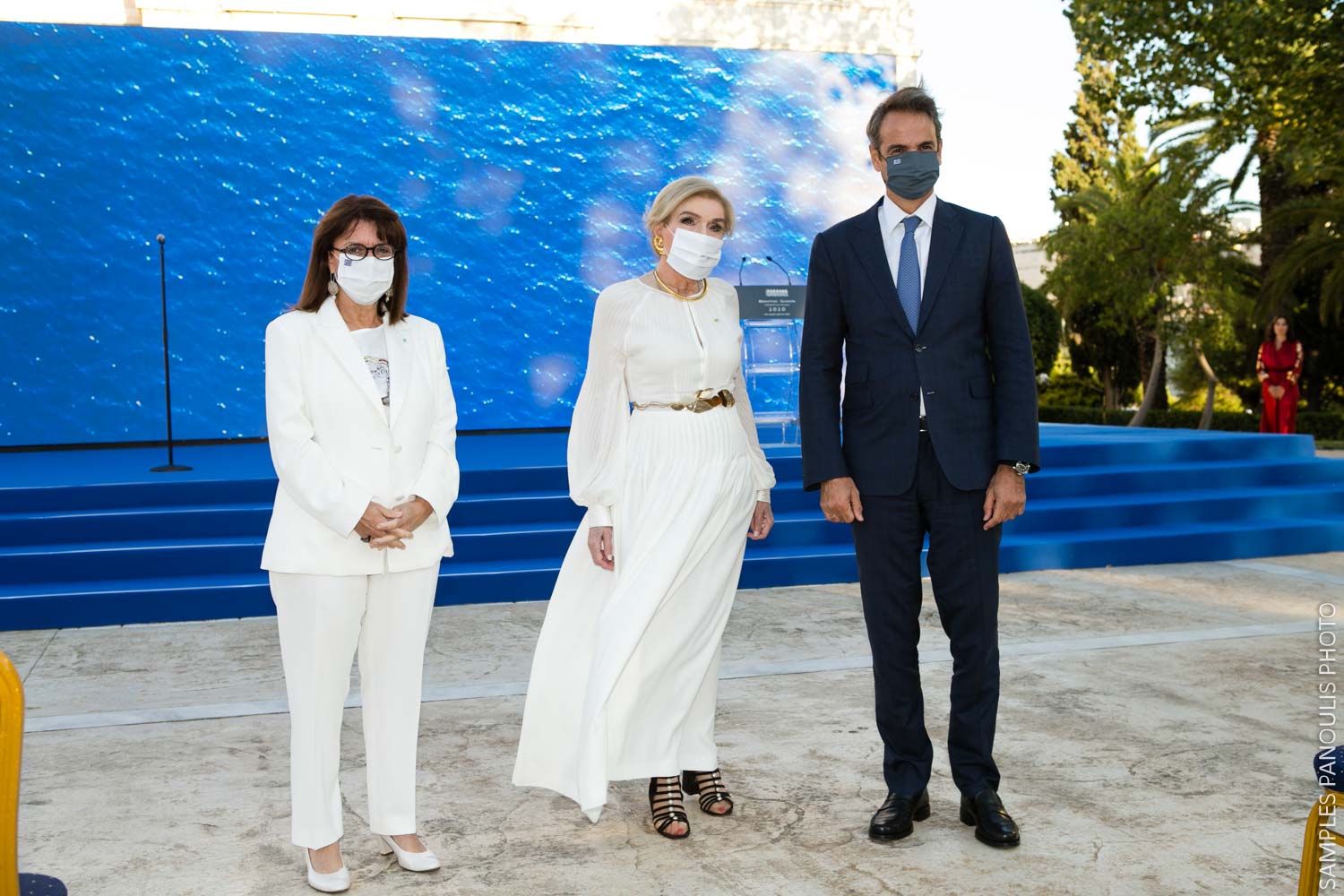 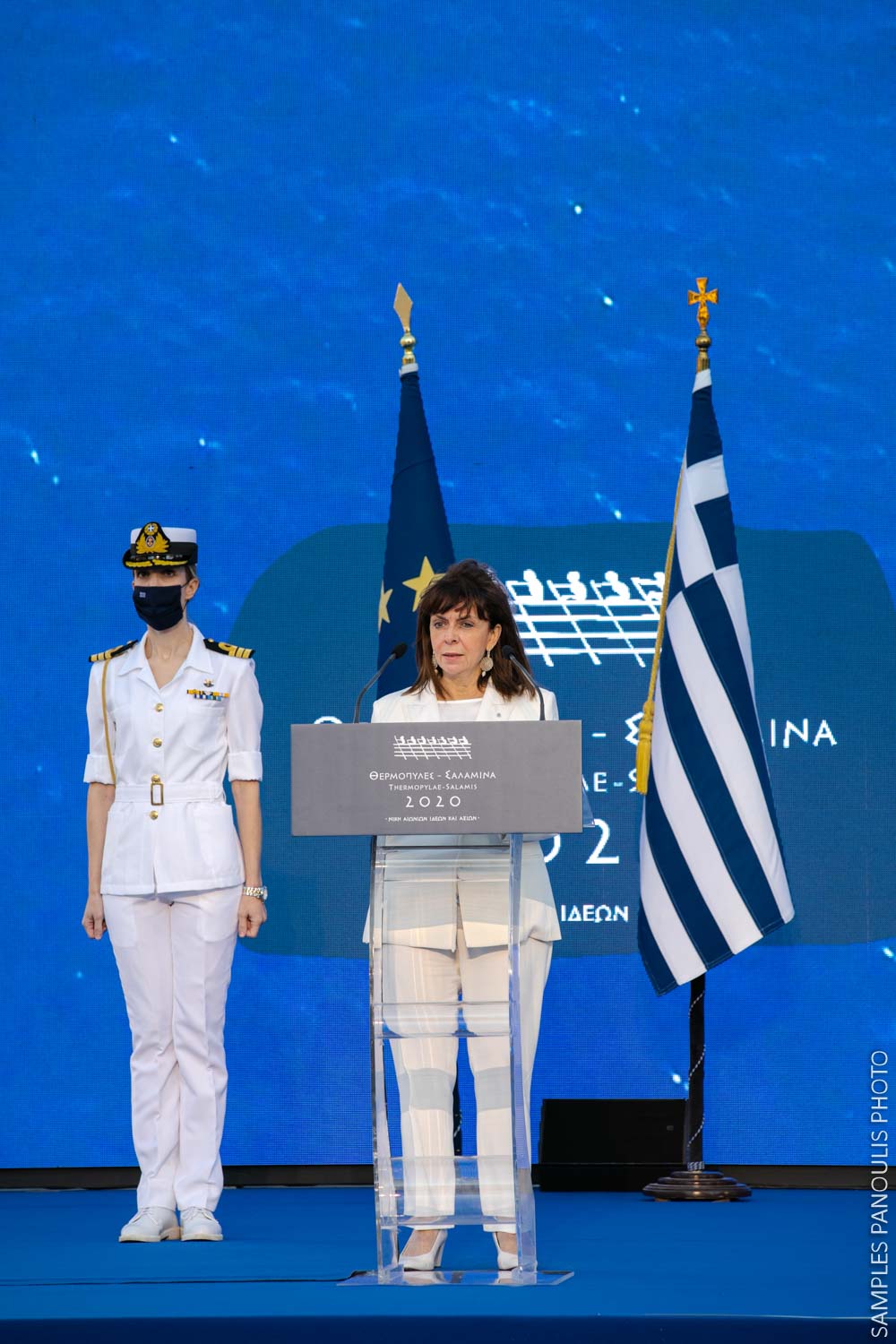 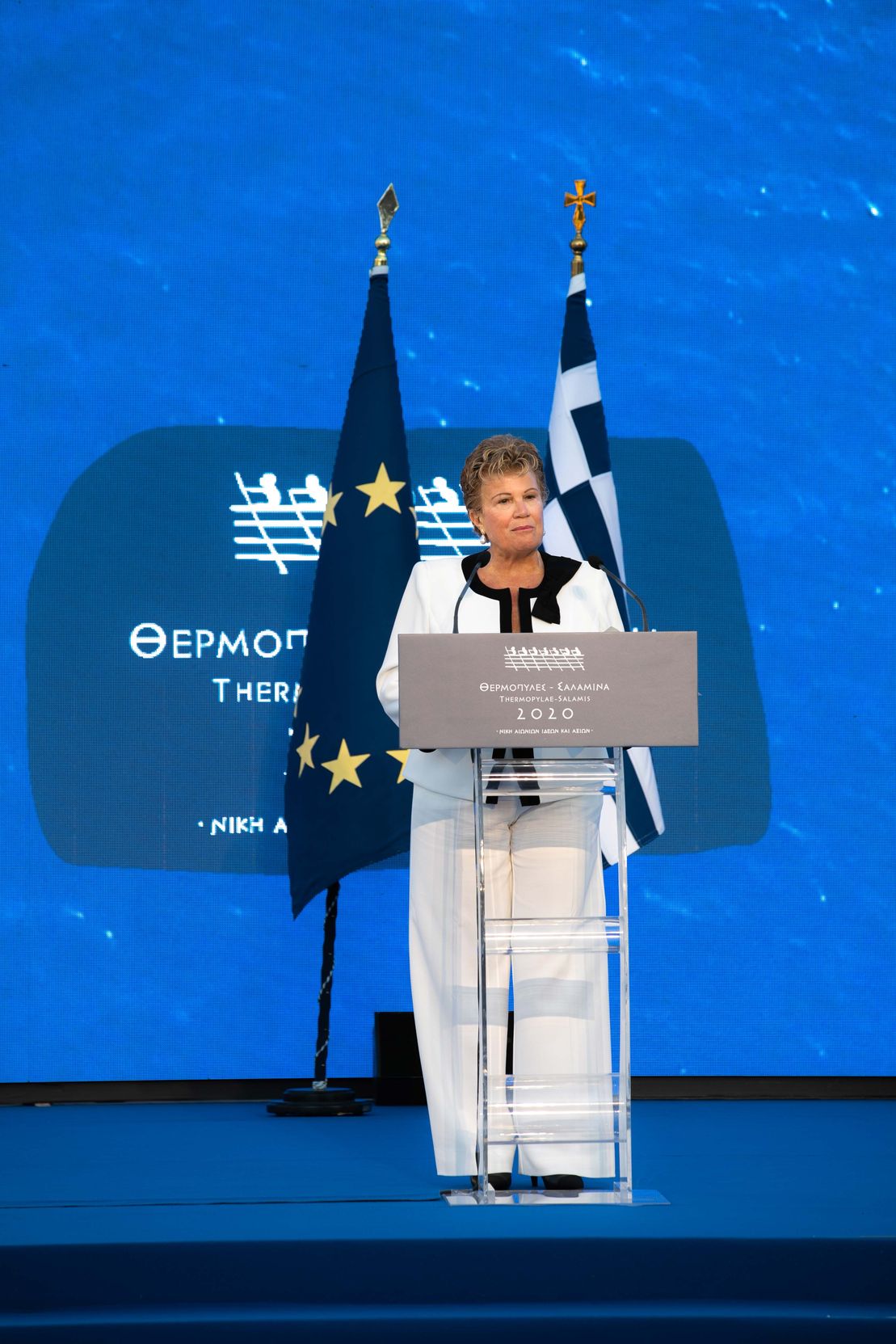 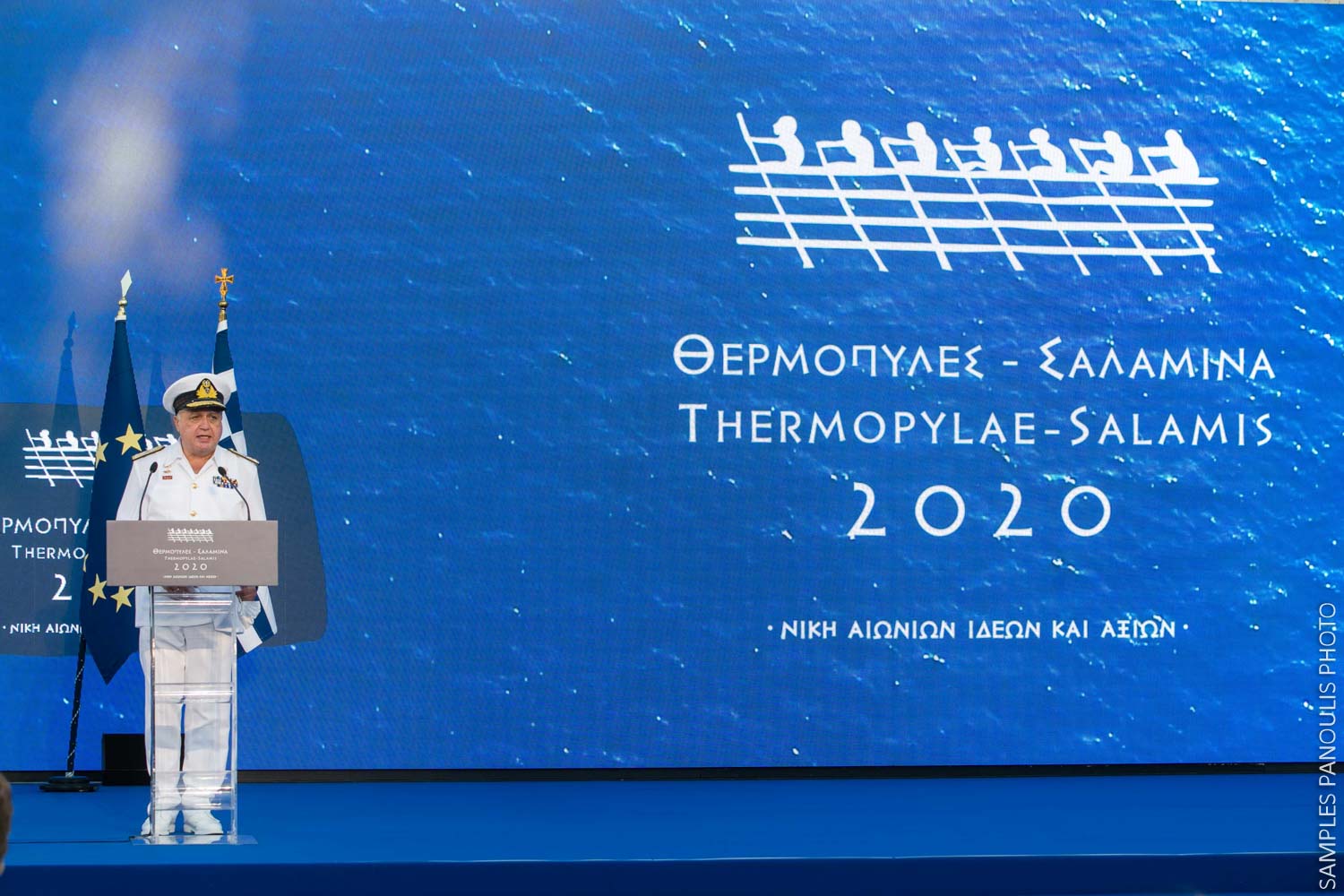 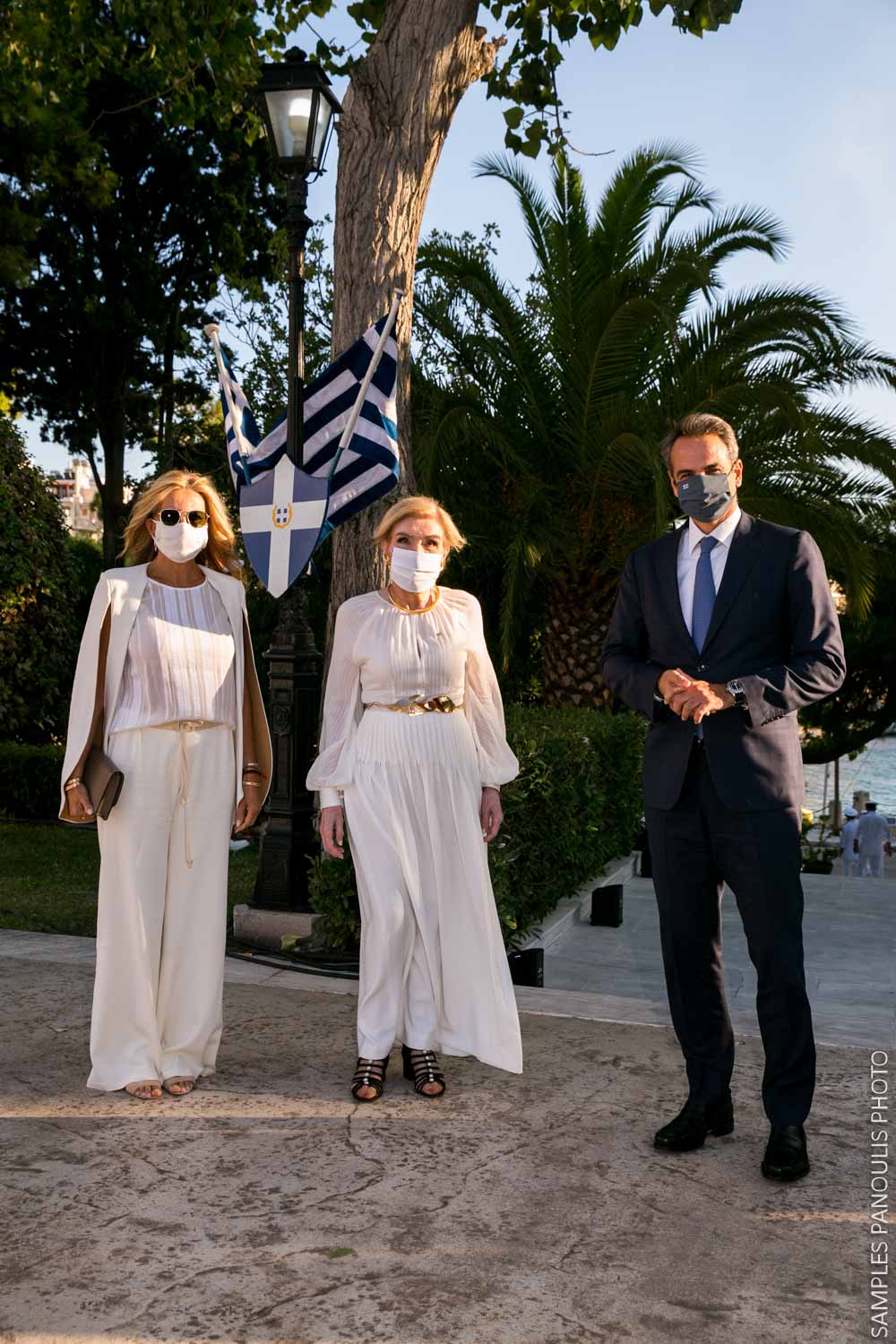 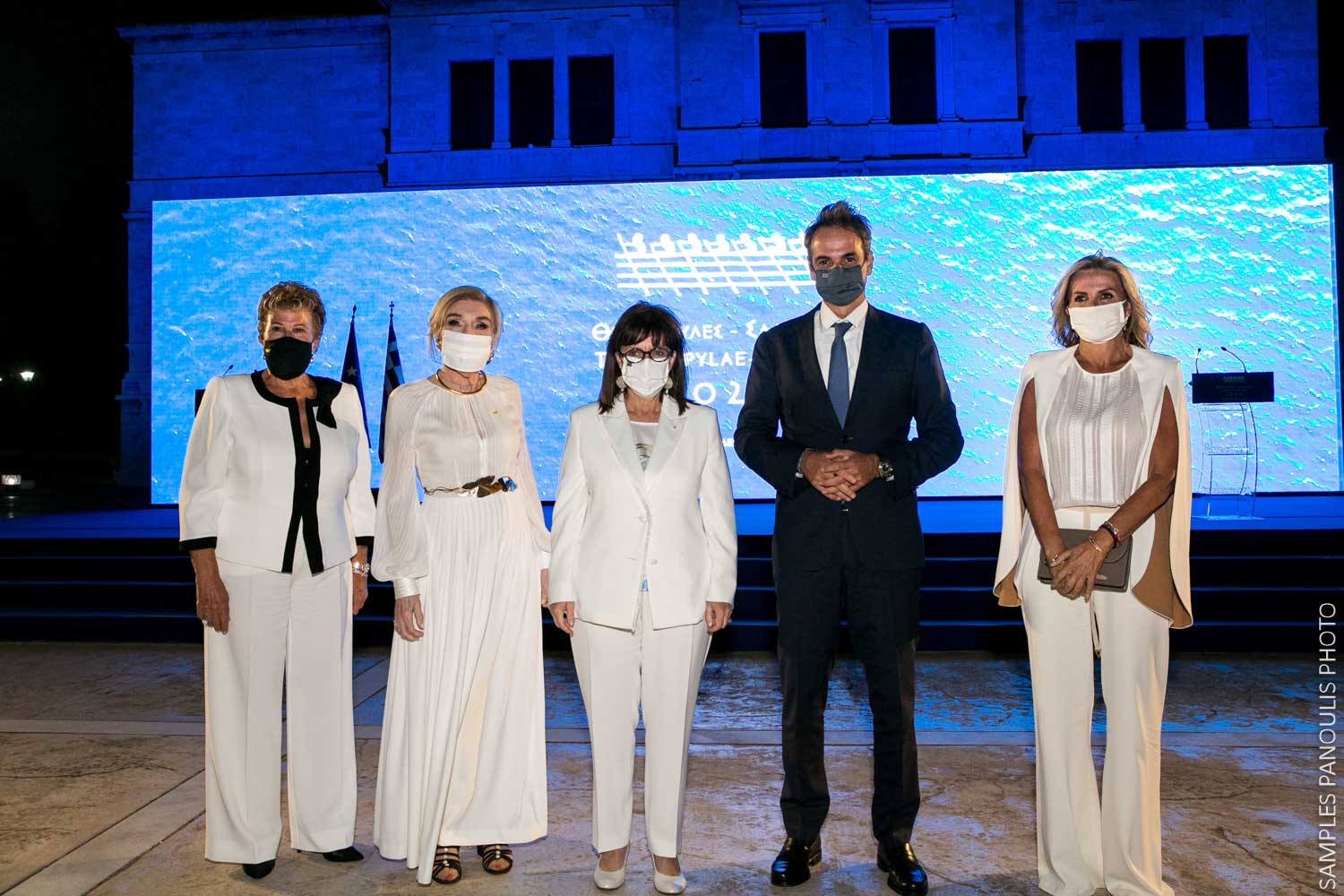 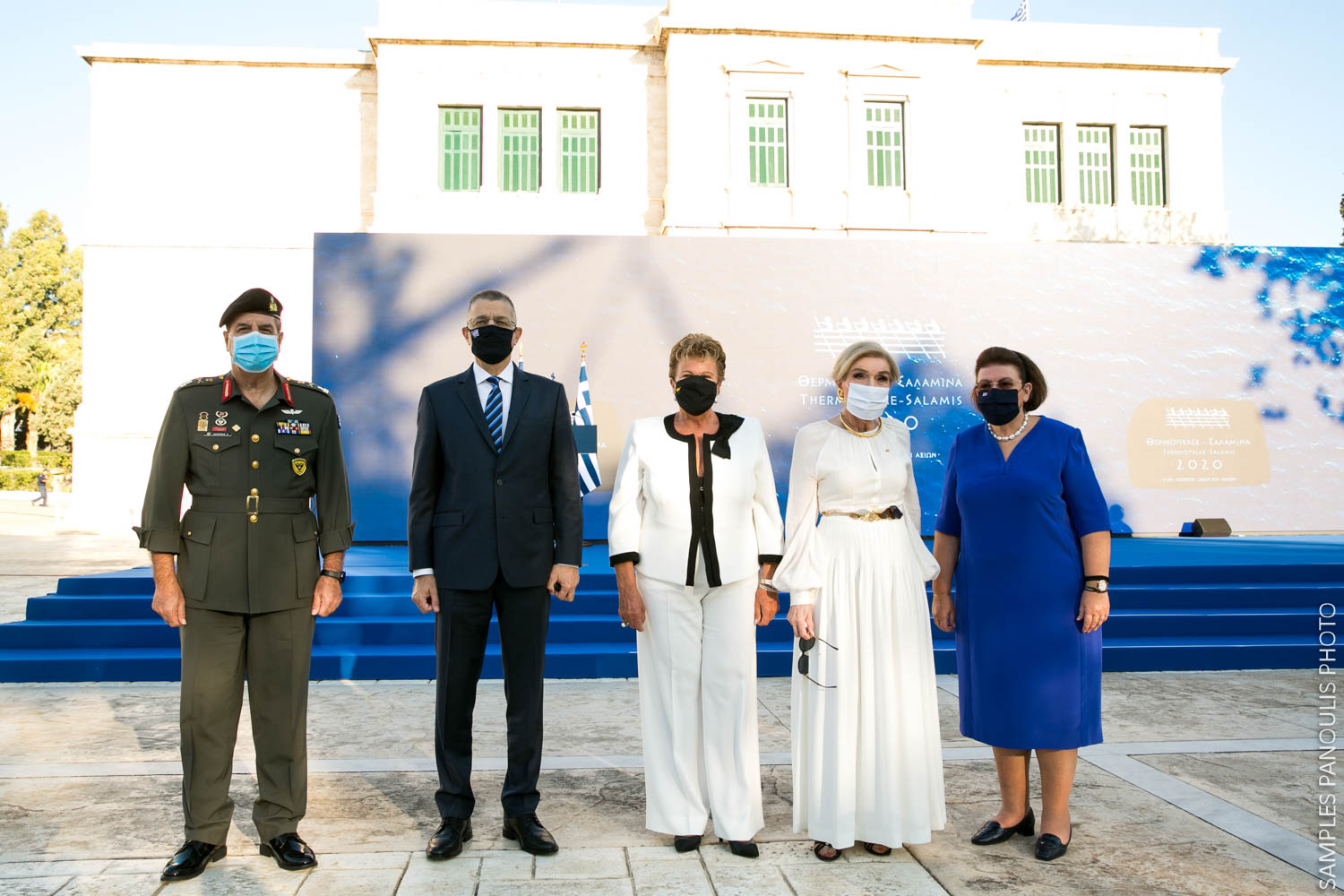 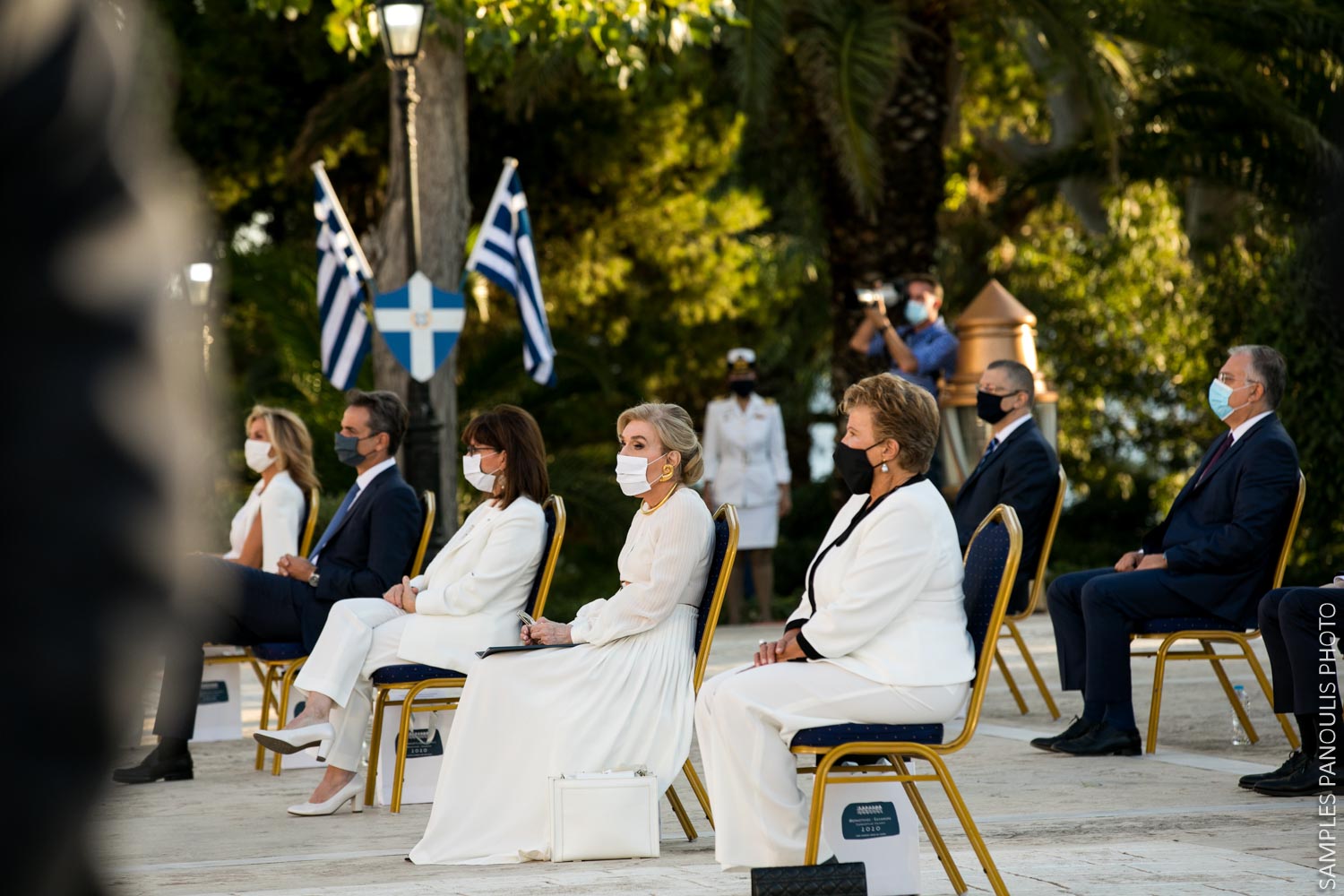 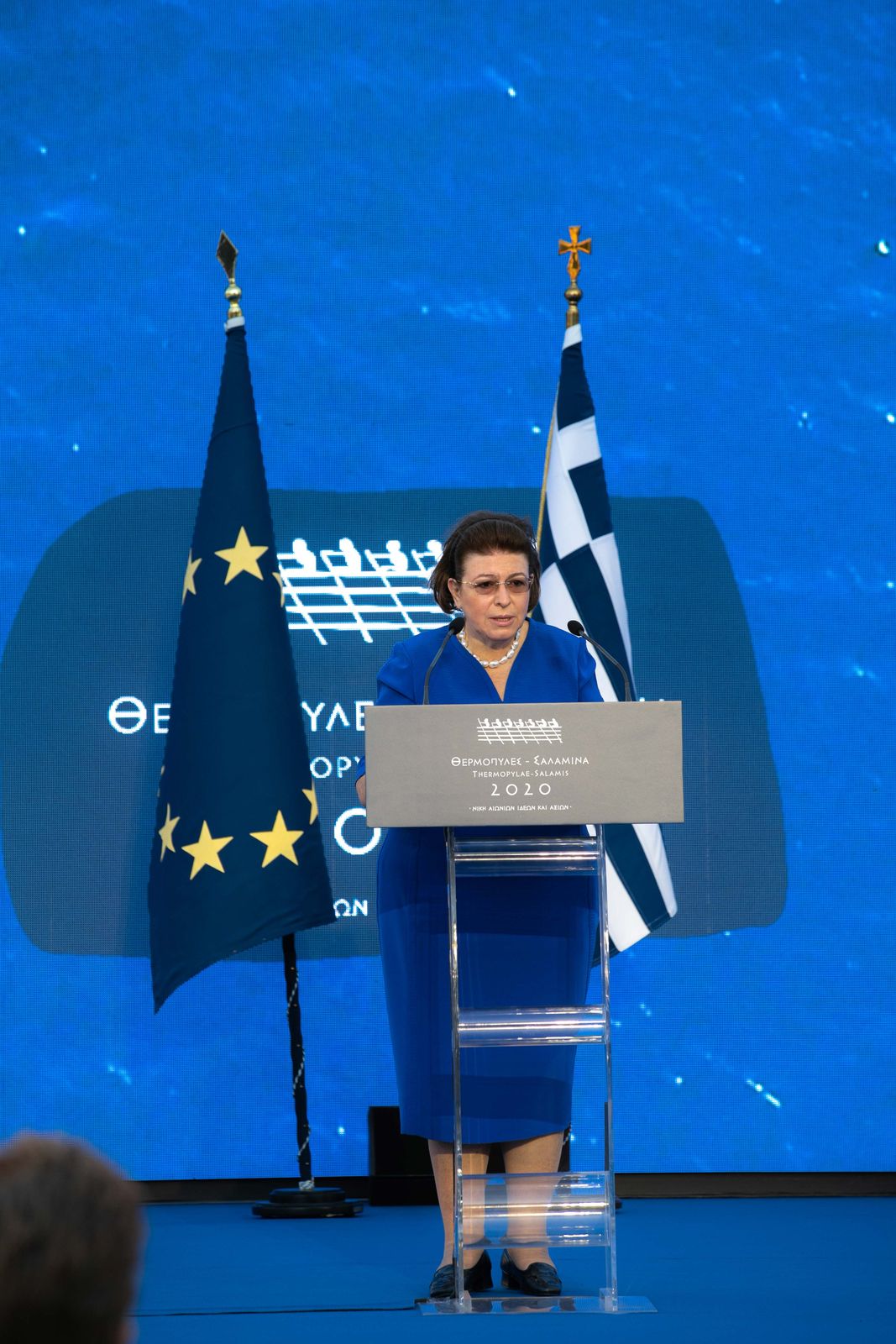 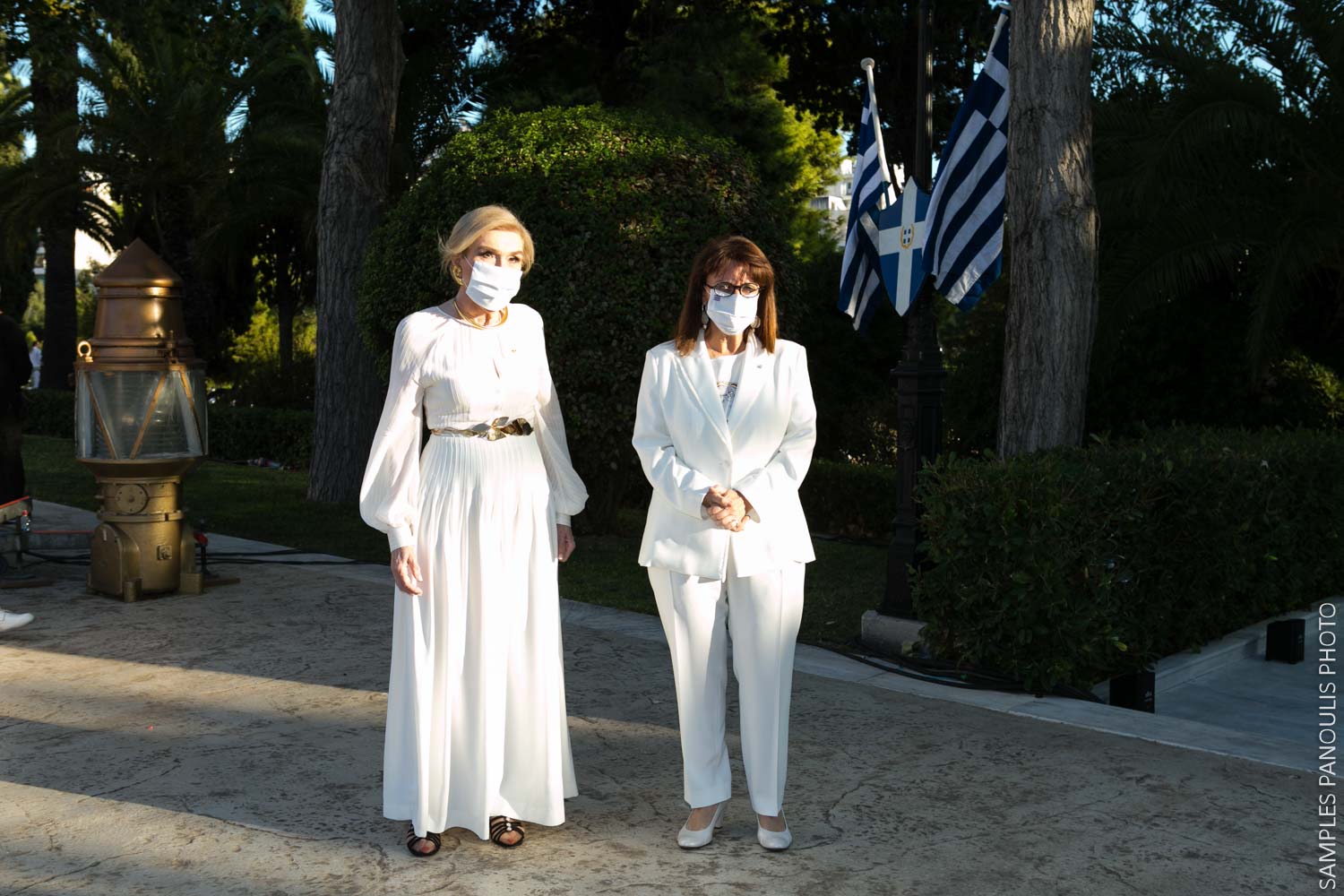 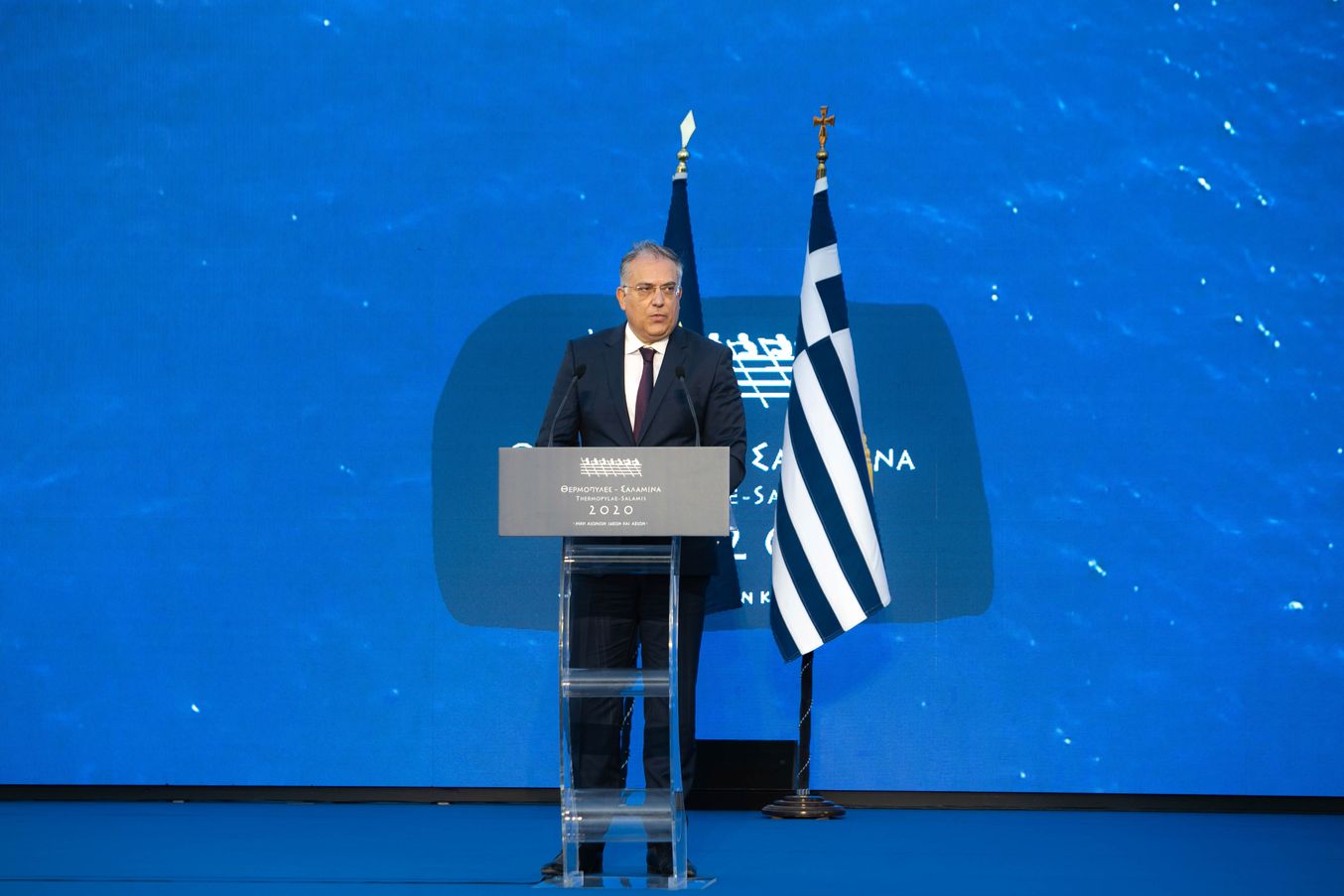 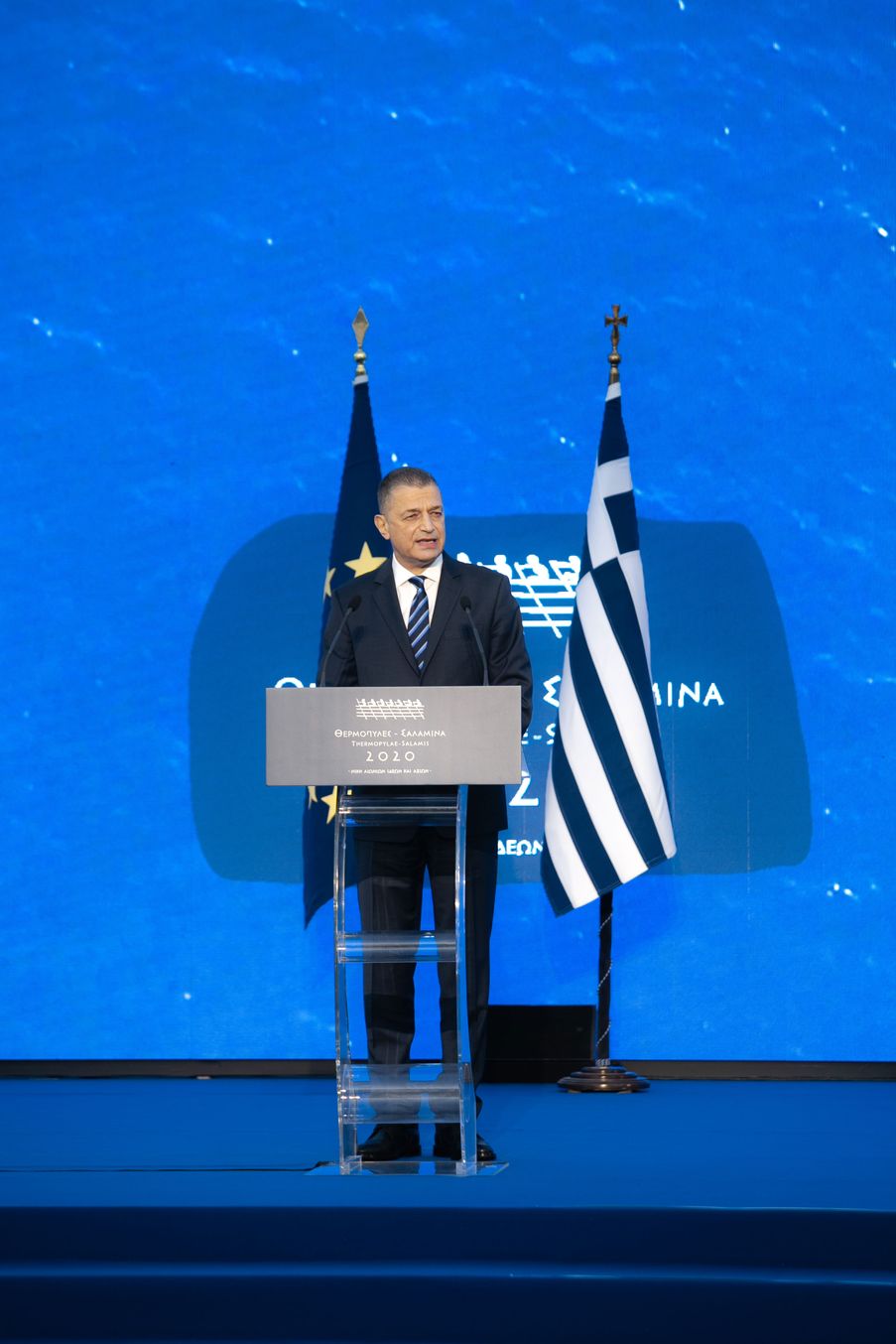 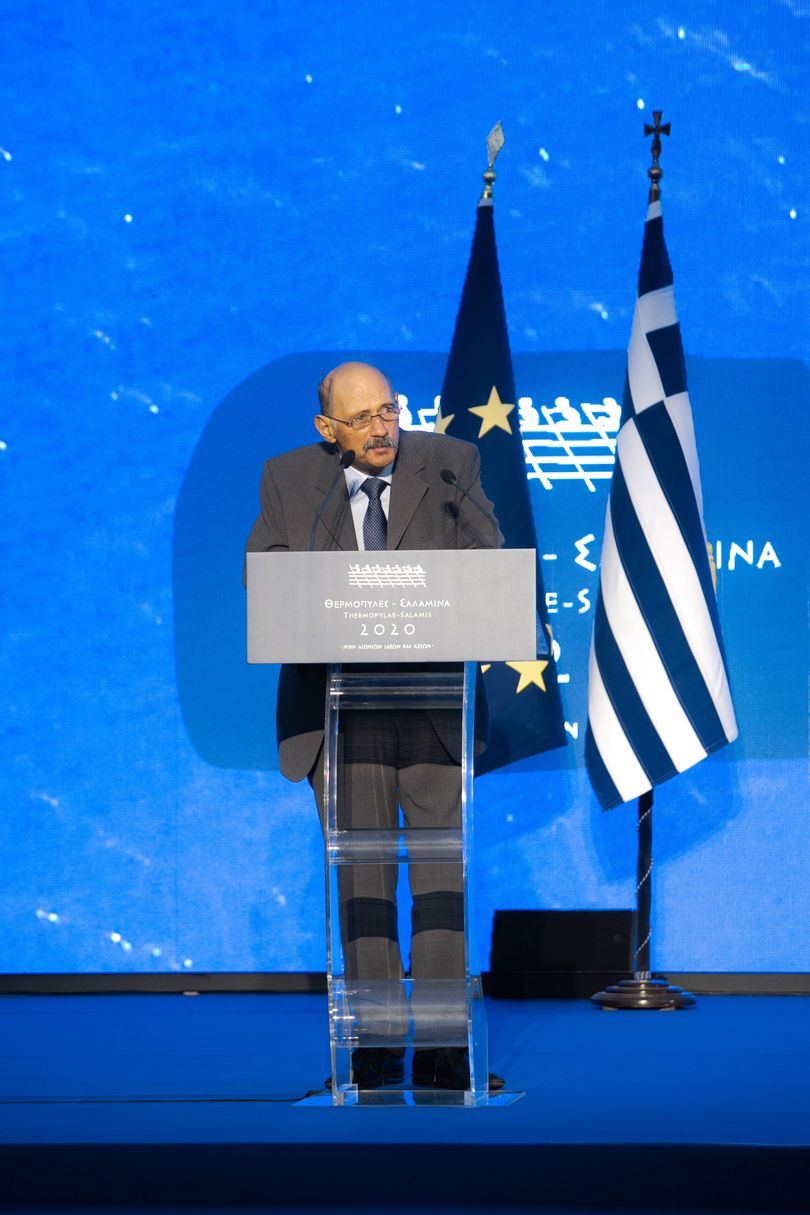 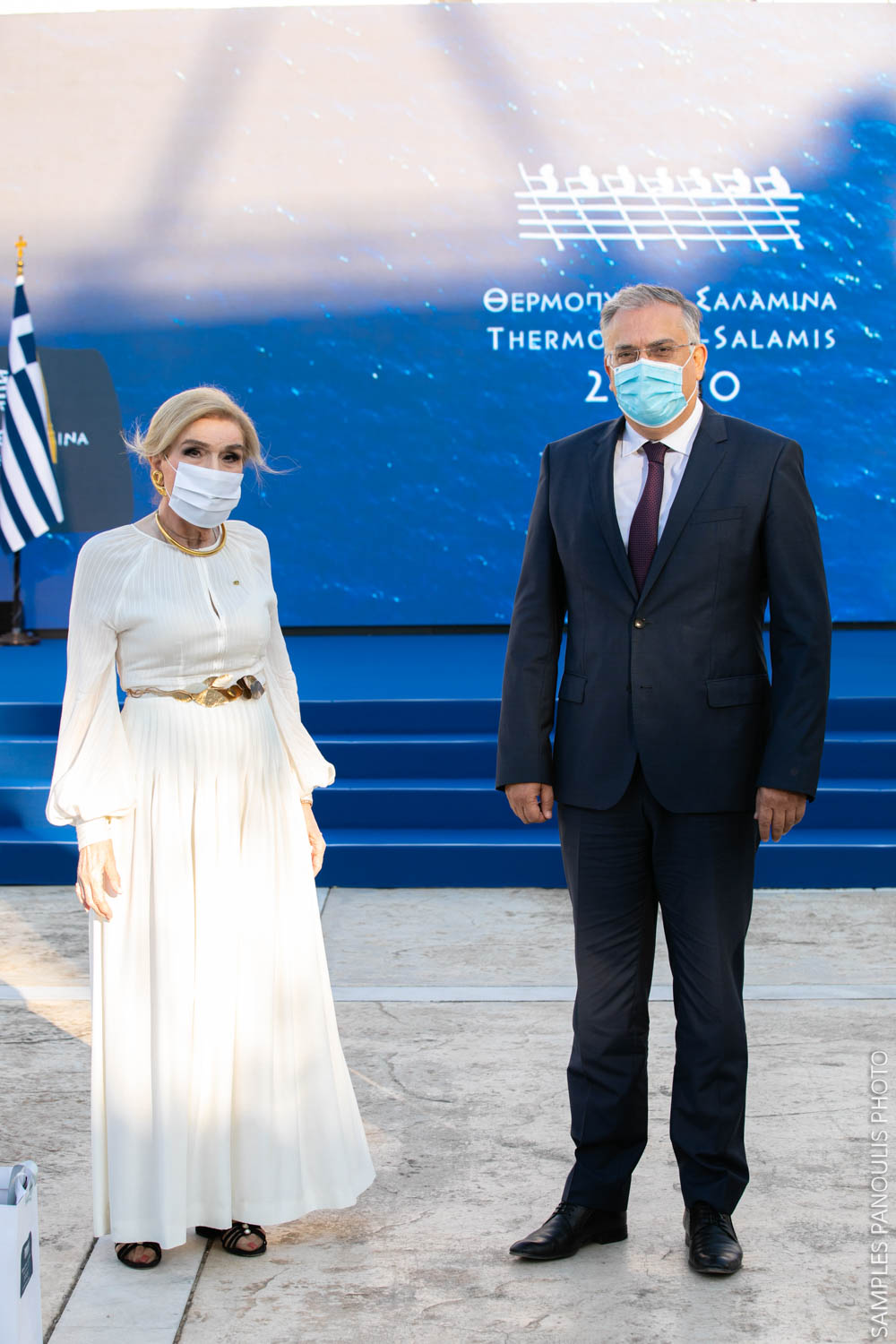 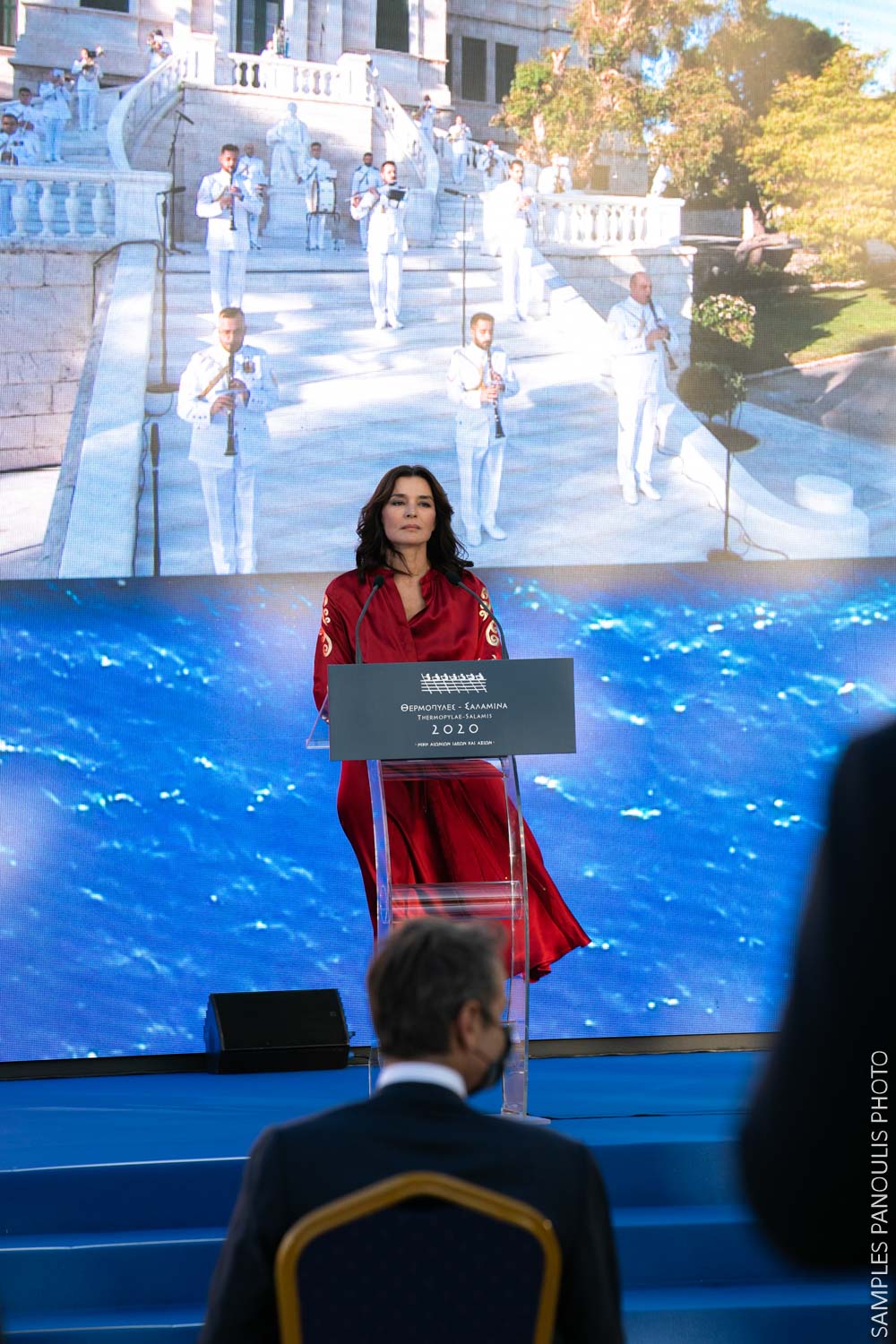 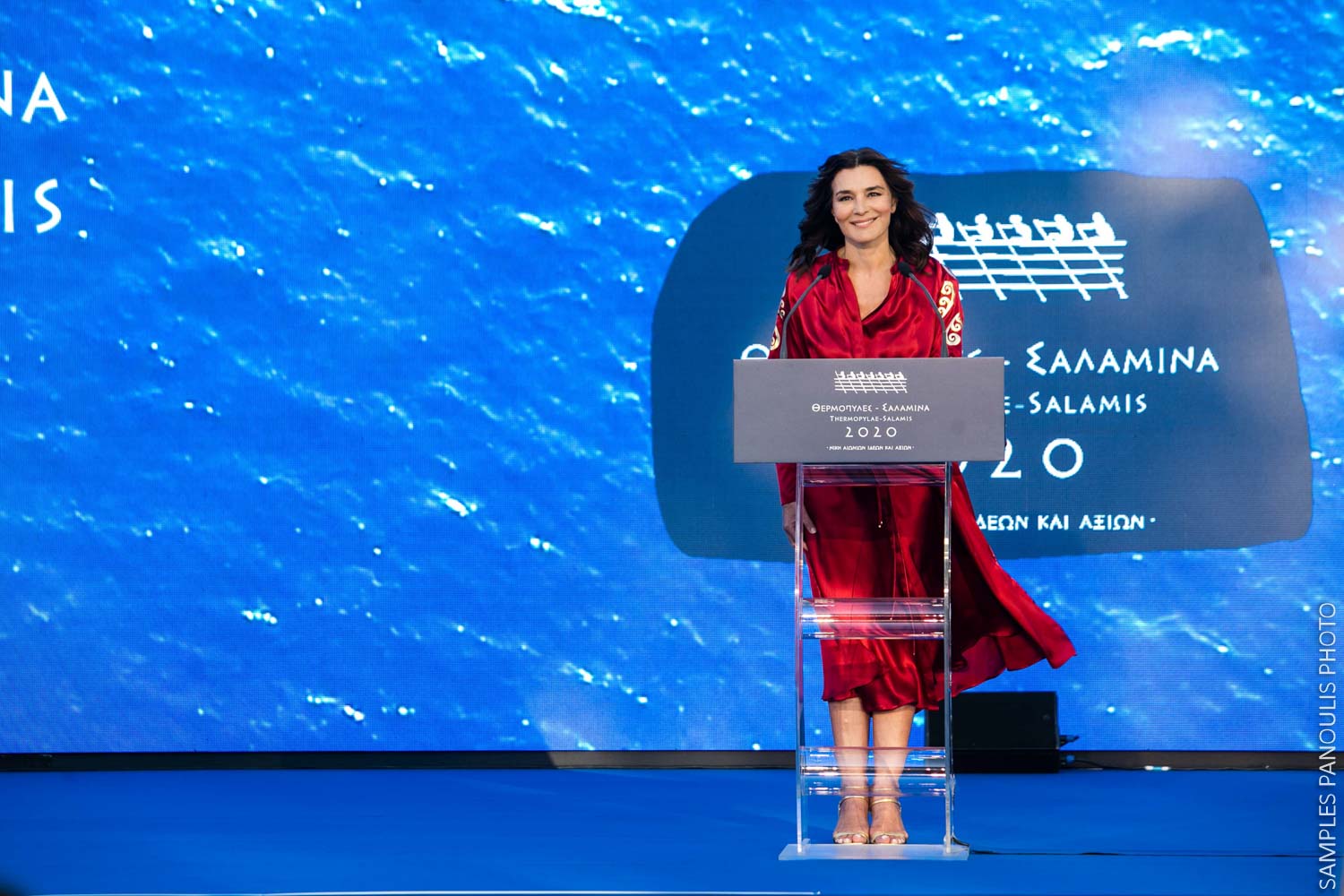 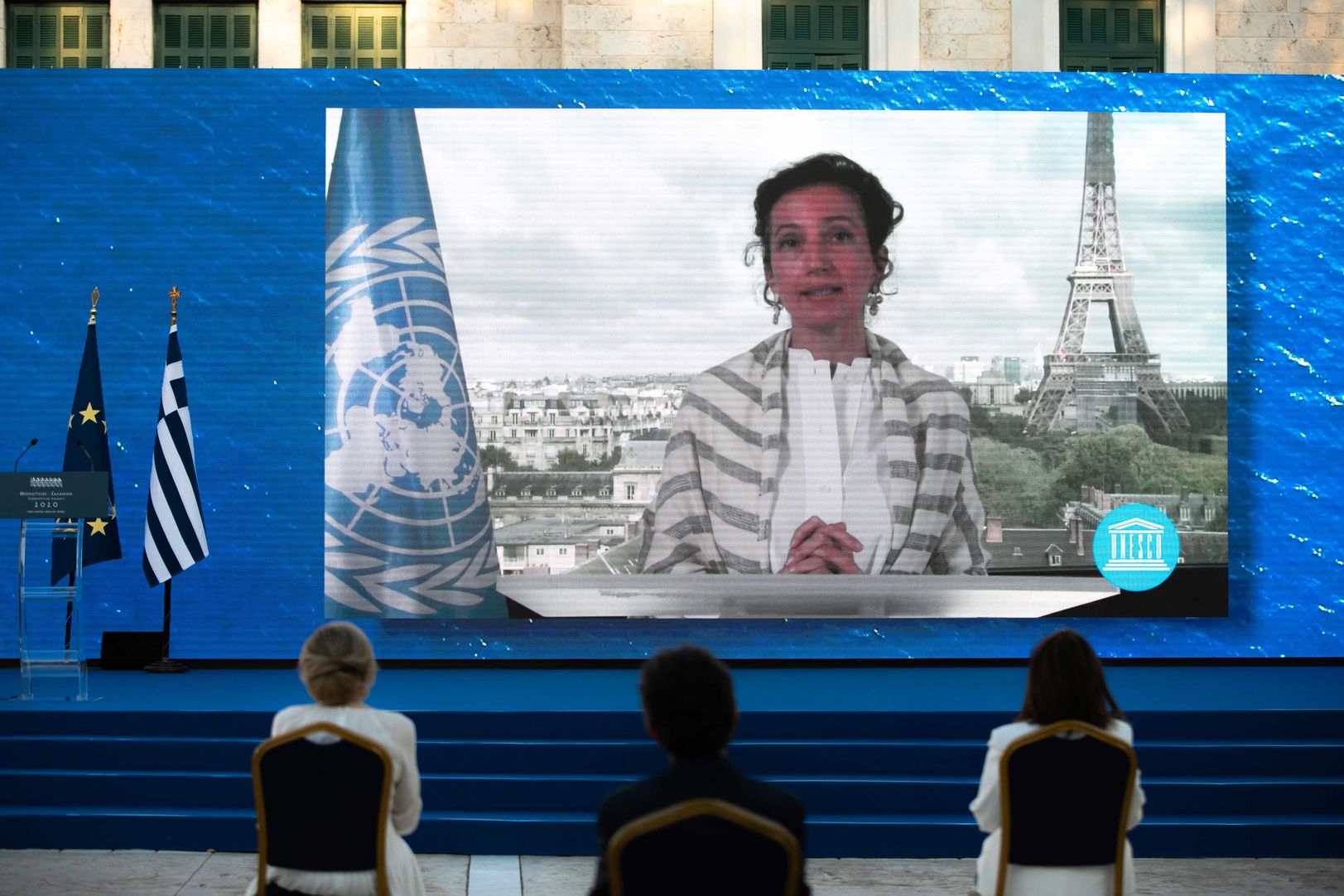 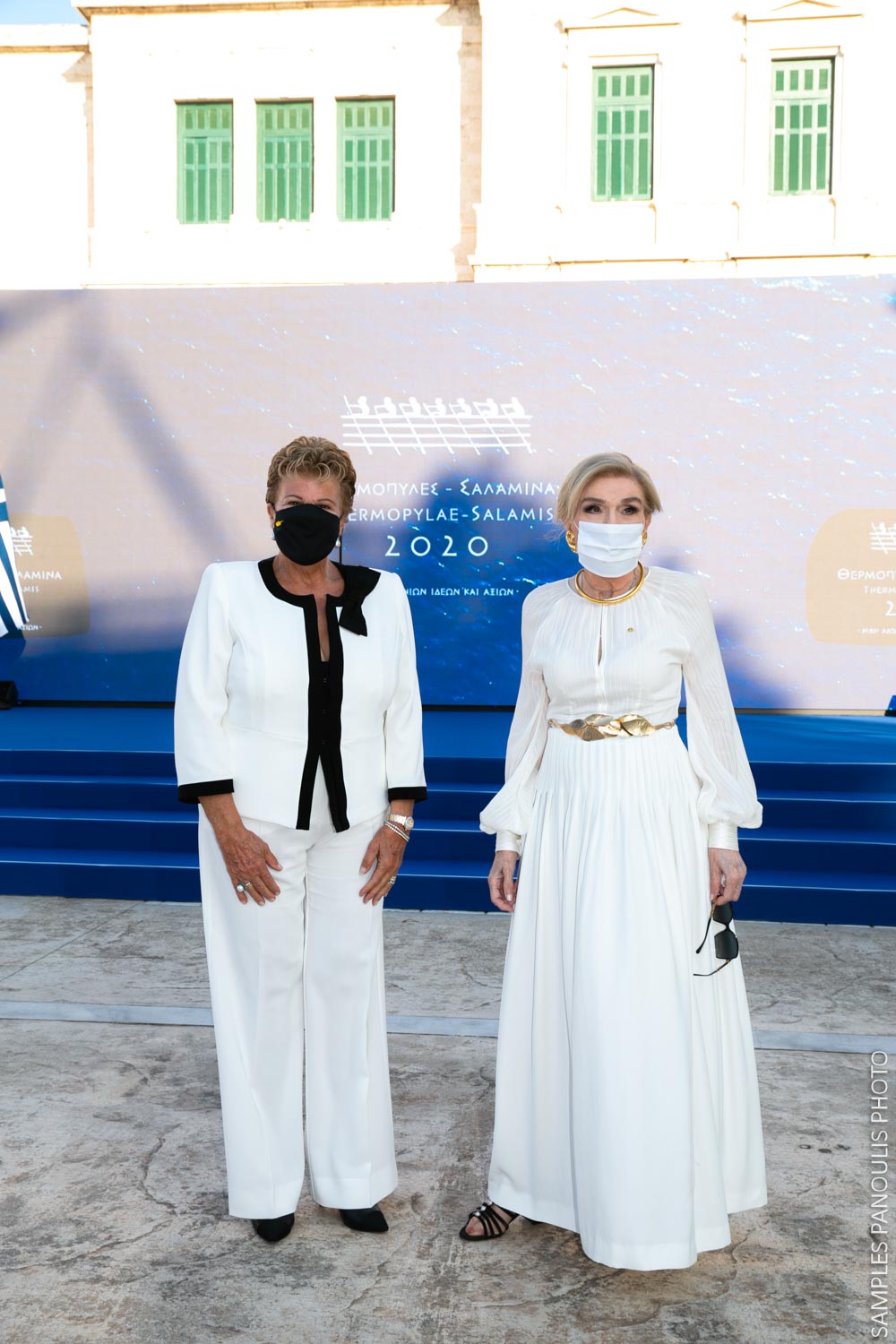 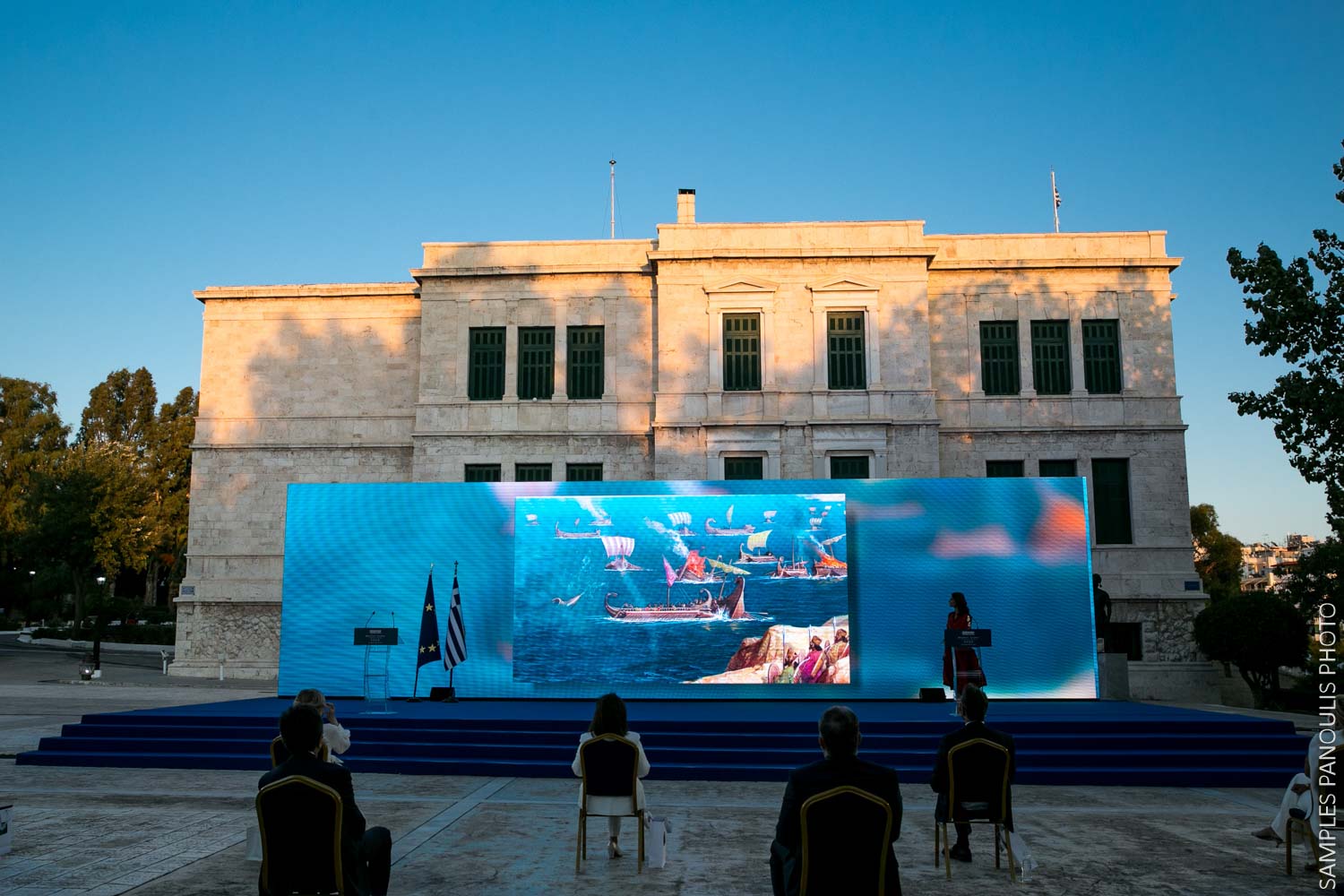 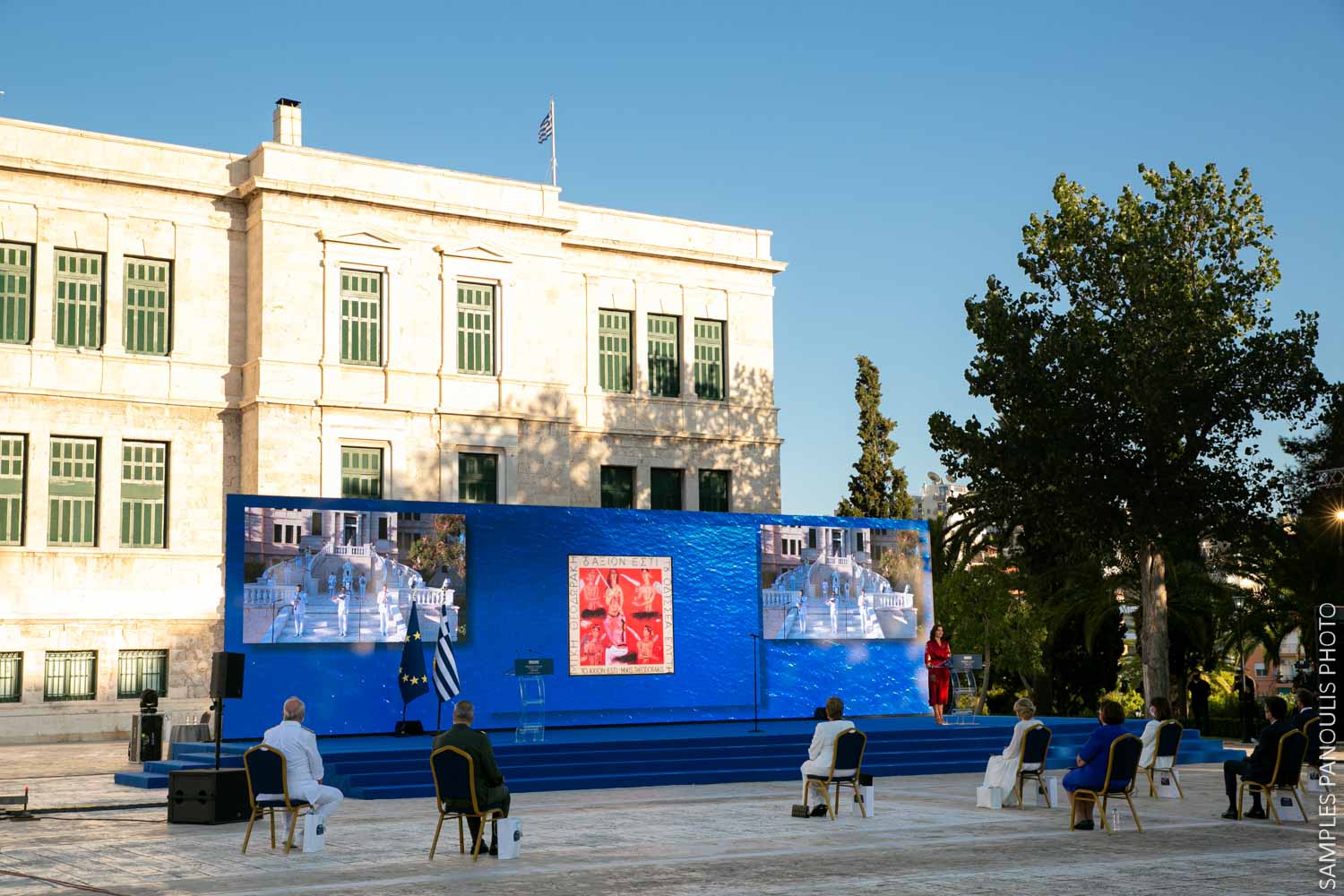 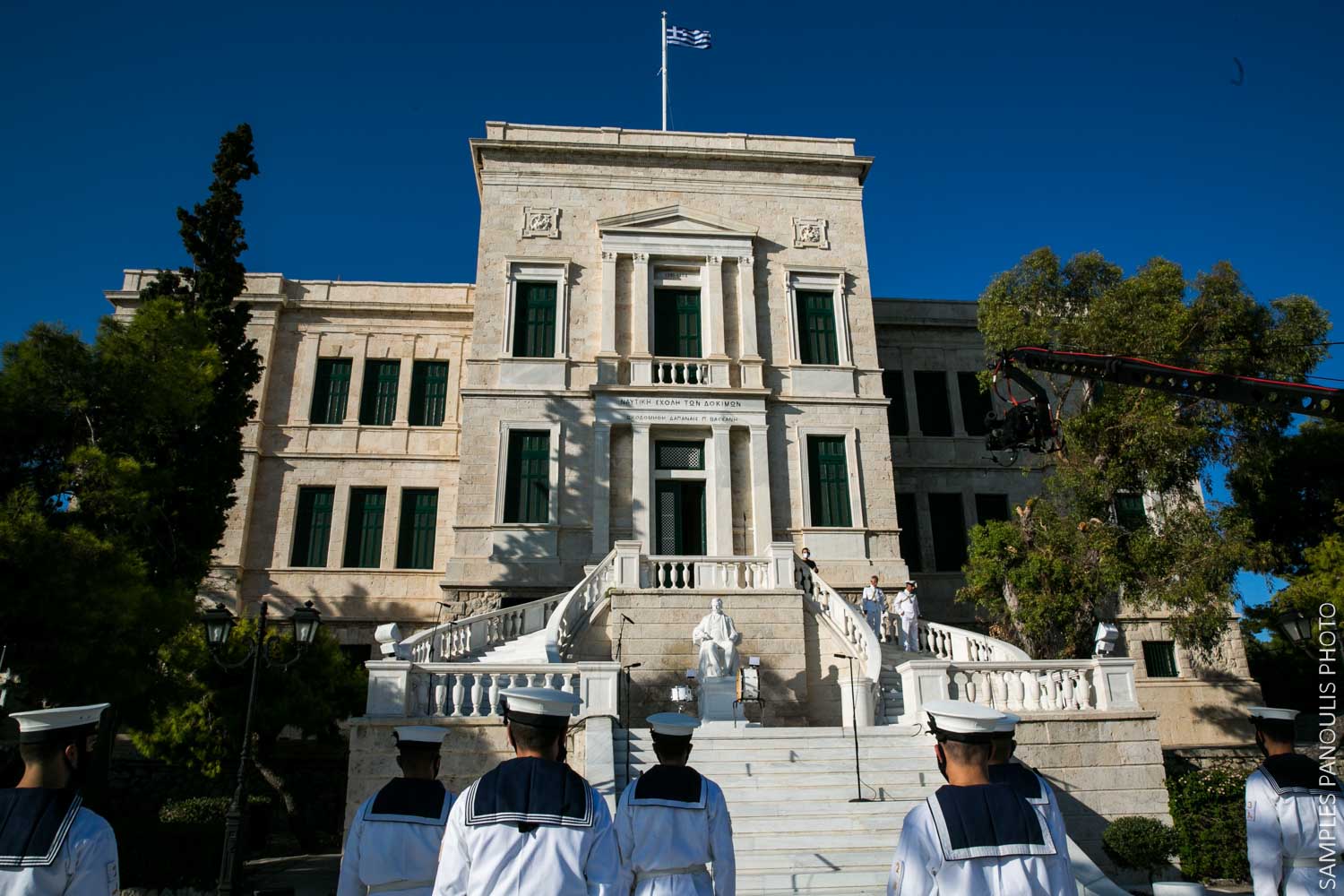 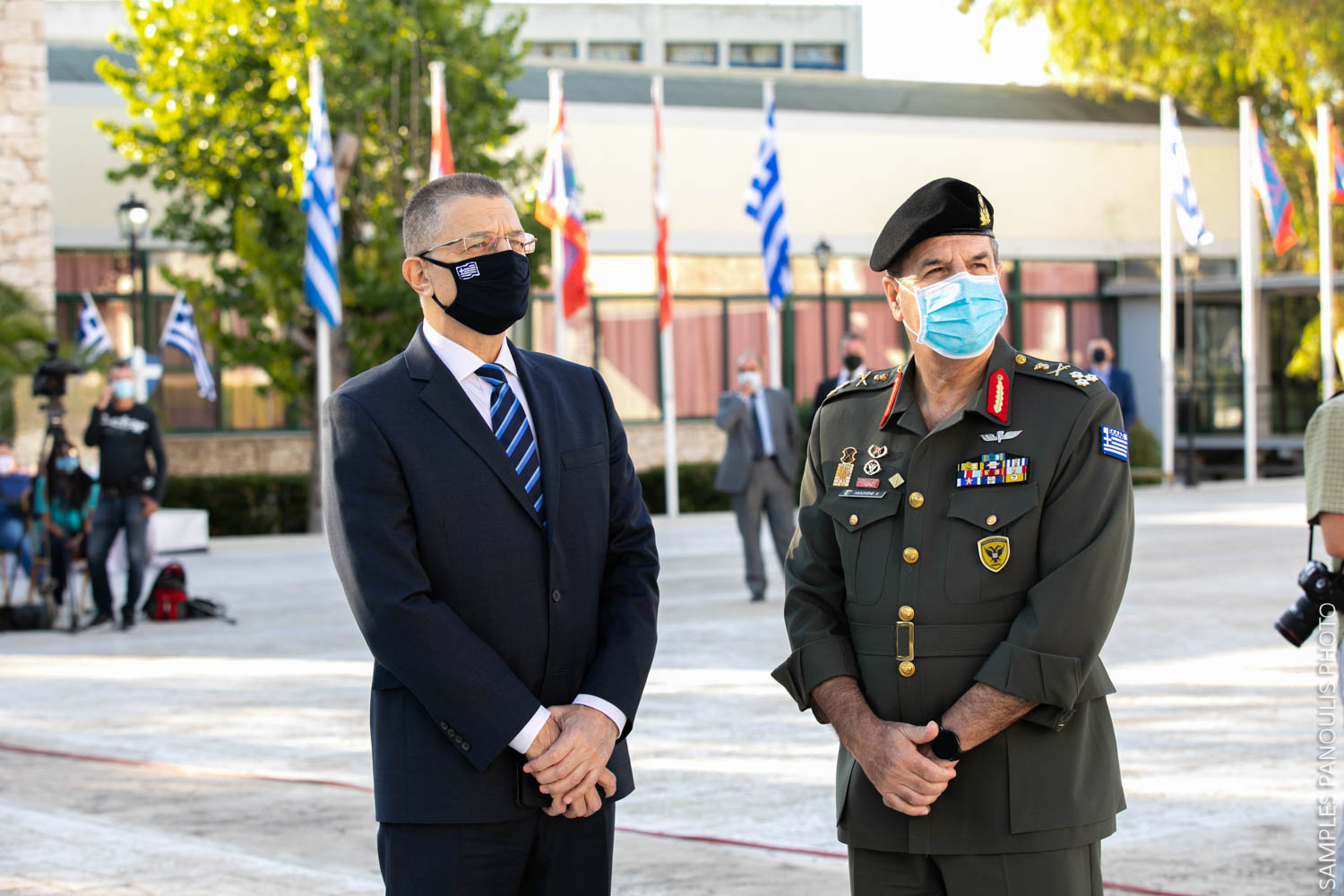 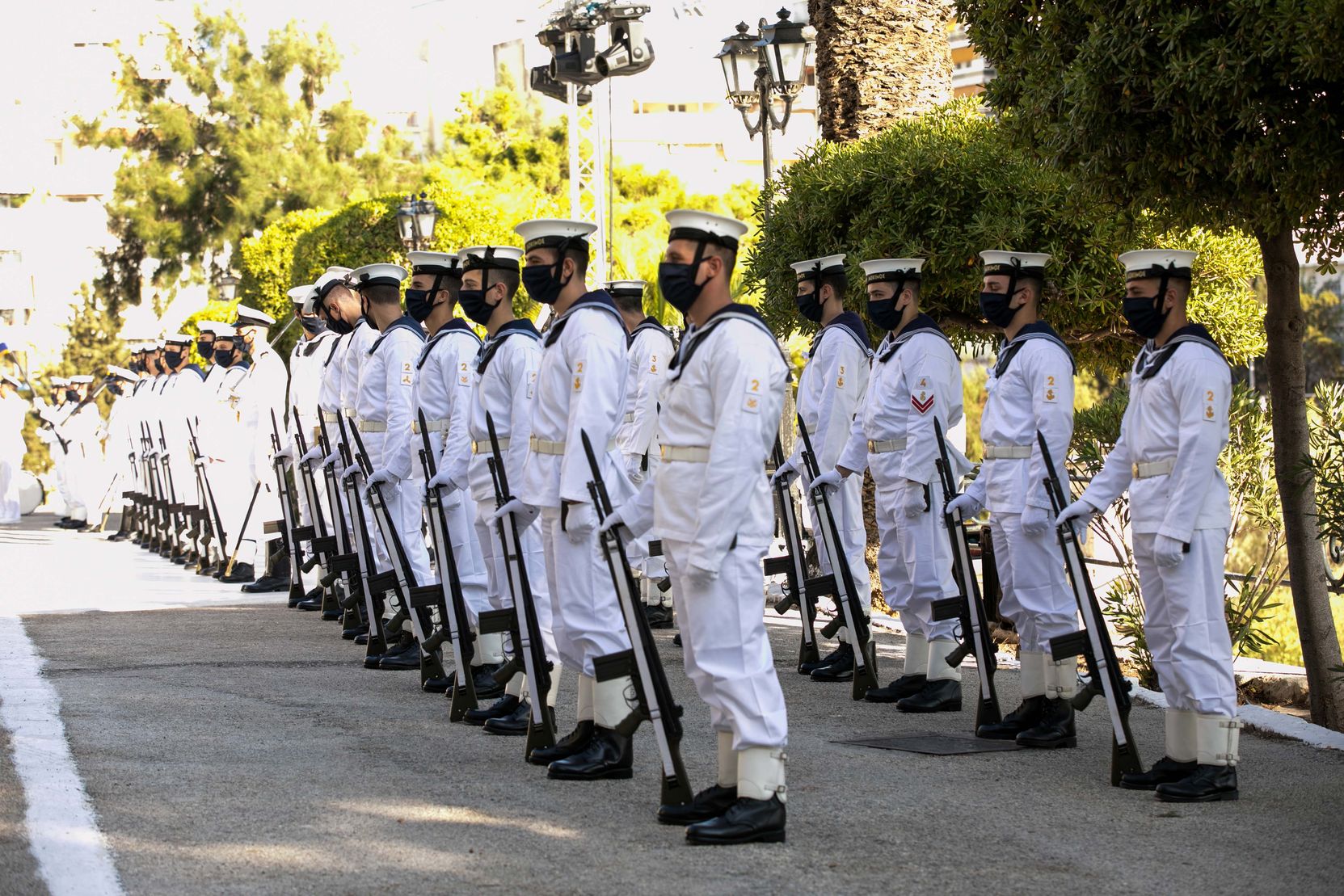